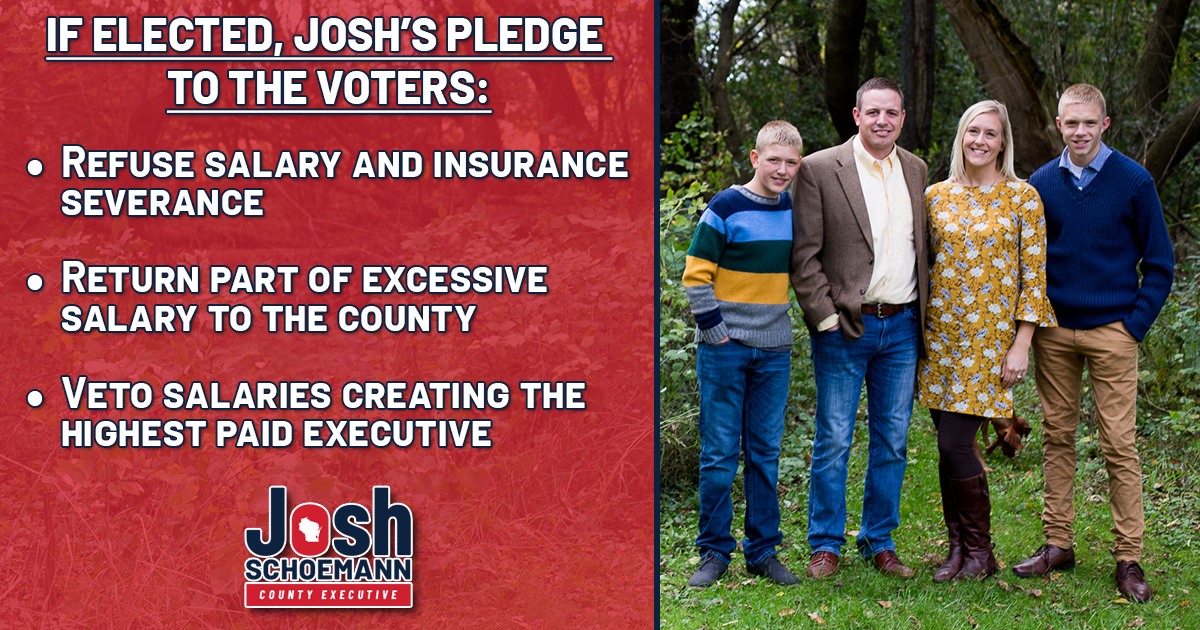 Schoemann Pledges to Refuse Severance and Return Part of Salary

Most conservative county should not be the highest paid elected executive

West Bend, WI — In September, the county board voted to move to the County Executive Form of government, which triggered a sixth month salary and health insurance severance for County Administrator Josh Schoemann. In November, the board set the salary for the new executive at $140,000. Now a candidate to be the first County Executive, Schoemann issued the following response:

When the county board was debating moving to County Executive, I pledged to not accept the end of employment severance if I continued my employment with Washington County. I intend to win this election. If elected, I will not accept my severance of six months salary and health insurance. I will transition to an elected official in a similar fashion as other staff who ran and won elected office.

Additionally, Washington County’s first executive should not be the highest paid elected executive in the state. We are the most conservative county in the state. I am pledging to return enough salary to the county coffers to be under Milwaukee County’s salary. As County Executive, I would have vetoed this excessive salary.

I spoke with Governor Scott Walker about his returning of a portion of his salary. Just as he did, I will have the salary withdrawn from my paycheck to remain in the county coffers.
Voters can learn more about Josh and the campaign at www.joshschoemann.com, www.facebook.com/JoshSchoemann, or on Twitter @JoshSchoemann. The election for Washington County’s first executive.

Schoemann Responds to Board Action on County Golf Course Annexation